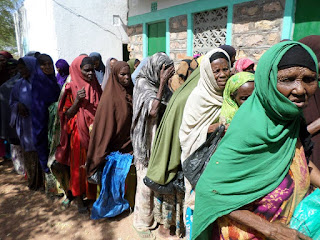 project since 2008. The meeting was held in the Kenyan capital city because in Wajir (located few kilometers from Somalia borders) is not guaranteed the minimum security standard. The purpose of the meeting was to plan the intervention of distribution of food during the drought and famine expected in the coming months. I could listen to the stories of John, Patrick and Father Alfred about the current situation and the perspective doesn’t seem encouraging. Kenya is continuously shaken by Al-Shabaab’s attacks and massacres. Over the last six months there have been the massacre of students at the University of Garissa (147 victims), the bloodshed of
non-Muslims on a bus (28 victims) and the massacres of workers in the quarries of Mandera 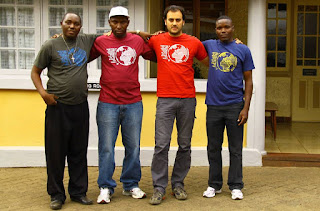 (50 victims). In this case the victims were Christians too. Wajir city, constantlyy shaken by inter-clanic conflicts, has so far been spared by the terrorists Al-Shabaab for the presence of a military base on its territory. These infiltrations see the complicity of the Somali clans residents in Kenya, and especially the Gerre of Mandera and Degodia of Wajir, engaged in decades of feuding. To arm themselves they establish alliances with neighboring residents in Somalia, thereby encouraging the entry of terrorists. This situation, already complex and desperate, is further aggravated by resentment towards the half million refugees hosted in Dadaab, the largest refugee camp in the world, by the threats of the Kenyan government to build a wall along somali border, and by the conditions of extreme poverty faced by the majority of the two million Somalis living in Kenya. 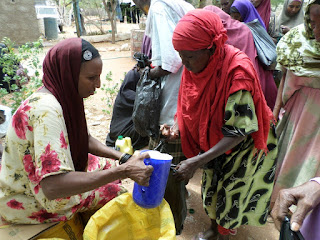 The father of all the misfortunes of Kenya is the geographical border with Somalia, devastated by two decades of civil war. Kenyan army is committed in that war through its own initiative within the Somali territory and a contingent taking part to United Nations mission in Somalia (AMISOM).
The northeastern Kenya, a boundless desert territory, has become unstable territory and forbidden to foreigners, who may become targets of kidnappings. This situation affects negatively the inflow of tourists to the coast, where popular holiday destinations as Malindi and Lamu are located.
Within this scenario of war and insecurity, the volunteers of the Grannies Centre of Wajir continue their activity. They are among the few remaining humanitarian workers throughout the region. Every day they support more than two hundred no self-sufficient elders and ensure the basic needs of dozens of families in need. The mission of Wajir is well accepted by the local people, who recognize a sincere commitment to charity without concessions to proselytism. Support the Day Care Center of Wajir it is our duty, because this frontier charity launches an important message of brotherhood toward Somali people and peace to the entire Muslim world.


If you desire to improve your know-how just keep visiting this site and be updated with the latest gossip posted here. www.gmail.com login


That is really interesting, You are a very professional blogger. I have joined your feed and stay up for in search of extra of your magnificent post. Additionally, I've shared your website in my social networks itunes account login